As we had been awake since about 4am we were sitting at the Immigration Office well before 8am. Our friendly man from yesterday appeared and assured us the ‘chief’ was on his way. An hour later we were still be reassured that he was on his way. 15 mins later the vital man arrived and we were stamped and through within 10 mins, that’s after Sarah had to run back to Alfie to get a pen as ‘the chief’ didn’t have one! Anything to oblige the officials and speed up the process!

We were in Kenya by 9.30am where we were met with efficiency – hurrah! 20 mins later, with lots of Kenyan laughter, booming voices and Lennie Henry lookie-likies (I think Sarah means rounder faces, big smiles and infectious laughter) we were on our way again ready for what has been described as the ‘worst road in Africa’.

One quick stop to change money on the side of the road with another load of black-marketeers and we were ready for the off.

Well, we believe the road pretty much lived up to it’s name. For the next 7 hours we bumped, thudded, shook, dodged hundreds of pot-holes, and hit a few, but when the road is a mass of pot-holes it is near impossible to miss them!

Early afternoon we heard an odd noise, a quick stop and inspection of Alfie revealed that the rear diff guard was hanging off at an angle. Rob secured this as best he could. When Rob went to get back into Alfie he grabbed the vertical support of the roof-rack which came away in his hand so out with the tool box to find a new bolt.

We ventured off again, crashing and banging along the road. Although everything was tied down in the boot, every time we went over another hole, the boxes all seemed to land with an almighty crash. Even the emergency toilet roll decided to dislodge itself from the back seat and launch it self at Rob! We laughed lots. ( Some more than others).

A rock-grinding noise forced us to stop again and this time the rear diff guard was in a worse state so Rob decided to take it off completely. If we believed the map and Sally, we only had about an hour to go until Marsabit so extra careful driving was needed. Rob dropped the more dramatic WRC style and had to drive as if it was a never ending RTV stage. Not quite as flamboyant but we still arrived in good time and in one piece.

We arrived at Camp Henry’s (N02 20.738 E37 57.925) very relieved we were all in still in once piece and Alfie had not had any punctures or other bits fall off. Another example of how bad the road was…7 hours of constant lumps and bumps had managed to undo the Marmite jar, but thank goodness the contents were still in the jar. Sarah had no wish to wipe Marmite out of Alfie!

A beer and an early night as we had day two of the worst road in Africa to go. However, later in the evening another Toyota rolled into camp. One of the occupants rang home and we overheard that they had been held back and given a police escort due to some trouble. We weren’t too sure whether they had travelled south or north but if they had come the same route as us, we didn’t see anyone really on the 7-hour trip, nor did we see any trouble so we went to sleep not thinking too much of it.

Another check of Alfie to ensure nothing else was hanging off or broken and a quick tighten of bolts again.

We also had a chance to speak to the two guys who arrived late last night. We found out that they had travelled up from Nairobi and neither mentioned anything about any trouble. Team Alfie therefore set off at a rather leisurely 8am.

Approx 1km down the road, we were stopped at a police check-point. We were asked to pull over to the side of the road which was a bit odd as most police check-points are a more ‘meet and great’ experience with lots of ‘hellos, where you from, welcome’ and ‘please go on’. Also these weren’t wearing blue, they were green and therefore army.

This time the conversation was…

Police : “where are you going?”

P: where you from?

P: Ah, you see, there has been some trouble and you’ve missed the convoy.

Rob – trouble, what sort of trouble?

P: There’s been some trouble on the road.

Rob: Ah, that sort of trouble.

P: Yes, fighting between tribes, but as you are not from the tribes (really! Colour of our skin may give it away), they probably won’t be interested in you. (that’s a relief then)

Rob: Do we have to wait for another convoy?

P: No, there is no next convoy, I guess if you drive fast and catch the convoy you should be ok. They are only about 10 kms ahead of you. It’s a tribal thing, the army have gone ahead to clear the road.

We didn’t at that point ask what ‘clearing the road means’, but our imagination was running riot.  Fortunately there were no body parts visible on the road as we hurtled through. 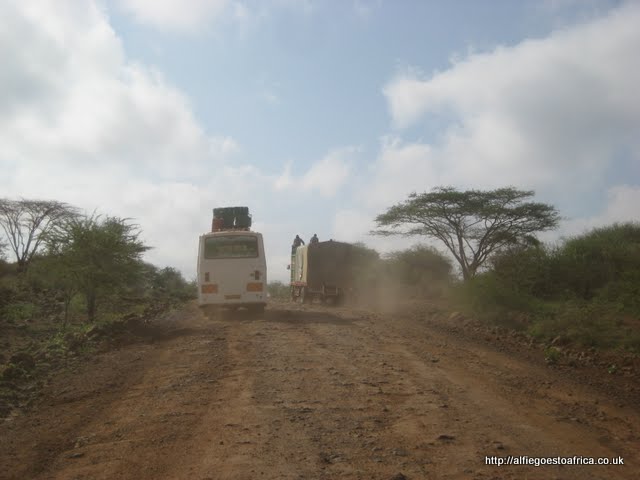 10kms is a bloody long way on a road which is rubbish. Alfie flew and within about half an hour we saw the rear of a military Toyota and a truck. Brilliant timing as we started to come across the tribes.

Despite the possible danger, the tribes were wonderful to see. Men, women and children were gathered along the road dressed in mixture of brightly coloured wraps, shawls and skirts. We could see quite clearly, even whizzing past, the huge ear-rings, head pieces and trible spears which they were carrying.

Ideally, we would have taken some photos but we didn’t feel too confident stopping in view of the conflict which was around us. We later found out that the trouble was over cattle. 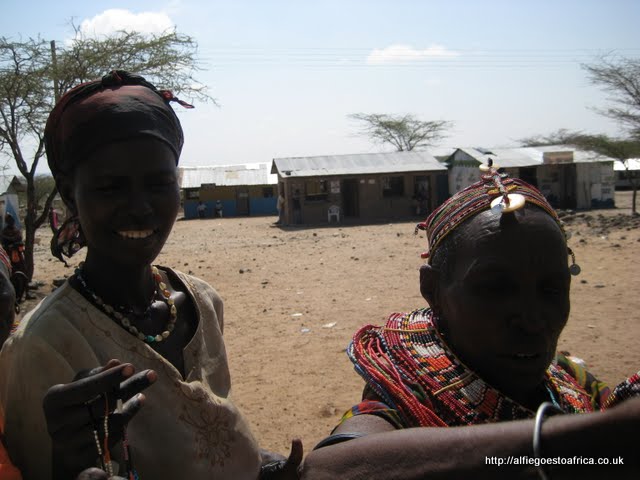 Having been with the convoy and army for about an hour, one of the army Toyotas overtook us and then waved us on again which we interpreted as being ‘go-on, you are safe now’, so we did just that and travelled on again by alone. We had been told that we would hit tarmac after 3 hours, but we managed to find it in 2 ½ hours which was a momentous moment! (see video) FYI the tar road now reaches to N01 24.033 E37 43.380.

We headed onto Nanyuki and arrived there about 2pm. It was the first town we had found in a while so we stocked up at the supermarket. We even treated ourselves to some freshly baked sausage roll and pasties! (we live in the fast lane of life).

Nanyuki is a regular training ground for the British Armed Forces so we saw a fair few British Army vehicles there mixed in with the UN vehicles.

We stayed at Mountain Rock Lodge (S00 06.790 E037 02.854), at the base of Mt Kenya. A lovely green spot overlooking trees and a stream, where we saw our first Colubus monkeys swinging around in the trees. We also met a group of people also camping at the lodge who reported that the monkeys/baboons had been into their tents and pinched food, opened up a wash-bag and eaten a bar of soap and the toothpaste.

We wouldn’t advise stopping in Archer’s Post as there isn’t much there. Suggest, travelling onto Nanyuki which is a large town with banks with working ATMs and even a supermarket.

A leisurely morning. Rob changed the air filter while Sarah tried again to clean out some of the dust and dirt from Aflie. We were visited by some of the baboons pushing their luck for food and nibbles. But this was also at the point where Rob decided to go for a shower and left Sarah to clear away breakfast. Everything was cleared very quickly and Alfie locked so there was no chance of the baboons helping themselves to any of our food!

We headed off to Thompson Falls…….(What a swizz- don’t bother, we’ve had campsites with more impressive showers.) and were a little disappointed. Although, perhaps when the rains arrive, the waterfall will be better.

Our aim for the day was to make it to Eldoret, which was via the main road to Nairobi so we thought the road would be pretty good. However, about 60kms north of Eldoret the road deteriorated badly and we were again caught up in deep tram tracks left over from years of lorries travelling through.

We took another lead from the Bradt guide and headed for Naiberi River Campsite (N00 26.938 E35 25.338) which turned out to be a fantastic find. We had the place to ourselves and about 20 staff to look after us! The camping spots for overlanders were ideal with each pitch having a BBQ, cooking and seating area. There is a fantastic bar and restaurant area adorned with wood carvings and a stream running around the edges, which was also the home of some very noisy frogs.

We were lucky, we had the place to ourselves.  However the place is pretty well geared up for overland trucks so in high season it may be worth checking to avoid disappointment. 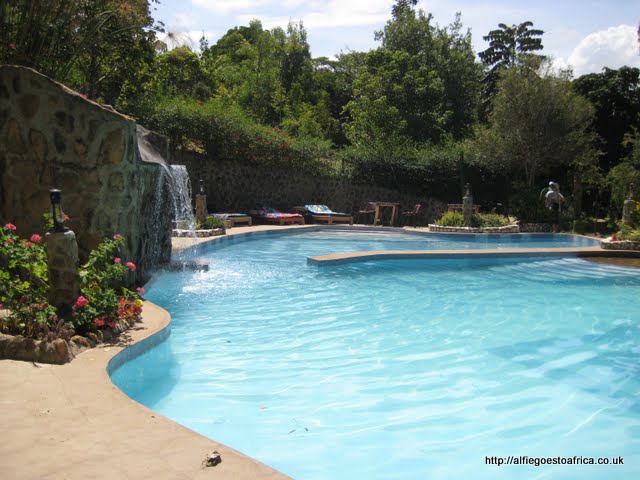 As it was the 1st December we thought we would spoil ourselves and just chill by the pool for the day which was bliss. We were joined by three other people so we were a little put out we didn’t have the site to ourselves but we coped. Lunch was brought down to us as we sat by the pool, it was just so so tough.

We had some great Indian food that night in the restaurant. Just a pity it takes so long to arrive and we were the only ones there again!

As we left on the day that Bill Gates stayed in Naiberi Lodge in 2009, we had made the decision to get to Entebbe in the same day to meet up with Rachel and Jodi – friends from home.

As we were also making good time to the border, we decided to cross at Busia which we had heard was less busy than Malaba. We made it the border at 10:40am and were through to Uganda in under an hour which was pretty good, as we passed a mixture of trucks and oil tankers all queing to get through. We did find a chap who pushed us right to the front of the queues which sped things up for us.