Just about 20 kms over the border we filled Alfie up…109 litres for less than 9 GBP! Fantastic.

We managed to avoid paying for a guide at Sabratha, got there just after it opened so apart from one small coach load had the site to ourselves.  Headed for the very impressive amphitheatre and assorted Roman odds and sods.  It should be noted that the toilets here have to be registered as the worst public loos so far.  As a World Heritage Site, the Roman facilities are more functional than those provided for paying visitors. (Something of a theme occurs along these lines). 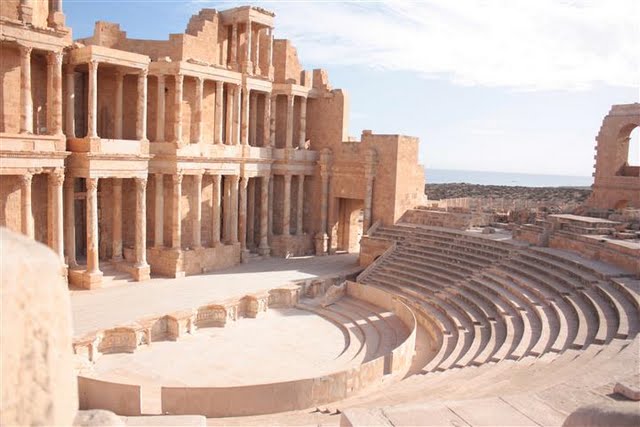 1040 – we left Sabratha and started the mammoth drive to Ghadames. Mahmoud’s home town so he was extremly excited about taking us there.  He also knew a couple of short cuts, so for approx 140Km of the 650km journey we ventured off the tarmac (heh) road onto dirt track through the Sahara.  Having a Touareg as your desert guide is most useful.
Arrived approx 6pm which was great driving by Rob, through temps of 42 degrees.
Headed for the campsite recommended to us by other overlanders only for them to have a problem with the toilets so we couldn’t stay there. (apparently a load of Italians ‘made them not work’ the day before).  Next stop was a college of some sort where a Scout presentation was taking place, but no luck there either…at this point, just starting to get dark and in desperate need of a shower.  Mahmoud then took us to a hotel where he managed to convince the manager to let us camp in the area at the back.
The hotel staff, weel, a guy who seemed to live in a tent in the back yard, cleaned a bathroom for us to use.  Sarah then went in again with her industrial strength cleaner and cleaned it again!   It then got a bit embarrassing as Sarah couldn’t then work out how to get the hot water on and received a funny look as the corridor and bathroom had a very strong smell of Cif!   Anyway, it was a pretty good shower.
Mahmoud picked us up from the hotel, and introduced us to his uncle, and took us to a resturant near the old Medina.  Sarah had the Camel which was lamb in texture and meaty taste but can’t think of what it tasted like apart from camel!  Rob had chicken.
We discussed plans for the next day, followed by a quick wander through the town, again everything was half built, but also quizzed Mahmoud about the police.  Apparently the police are the friends of everyone, and don’t issue traffic offences which is a pity as there would be a huge monetary stream for Mr G if they did!
Back to the hotel and a good night’s sleep.  Very, very windy outside, Alfie was rocking so much that Rob had to go and baton down the hatches.

Sunday 17th Oct/day 13 Ghadames to desert camping: Odometer – 74769 km.
Rob had noticed that the rear dif was still slightly leaking so with overalls on, spent the start of the day under Alfie.
Sarah’s tooth ache was much more painful and more localised to upper molar on left jaw.  Really needed to locate a dentist, but Sarah not at all confident about using one in Libya.   Decided to hang on and see if we can make it to Cairo where by all accounts, the dentistry is much, much better.
We then headed for the old Medina which was extremely interesting.
Spent an hour at the internet cafe, followed by an invite to Mahmoud’s house for lunch.  We had to wash our feet before entering the house, then were offered tea, which is so strong and so sweet we were both glad that they come in such small glasses.
Lunch was served from a central bowl, consisting of lamb and cous cous in the main bowl, with smaller bowls of vegetables (spicy), and chips!  We ate well, and asked for another helping of the sauce in particular.  Again tea to follow.
The family were ushered in to meet us, with lots of hand language and gestures saying nice to meet you and thank you.
At last we were off back into the desert and heading for a bush camp. 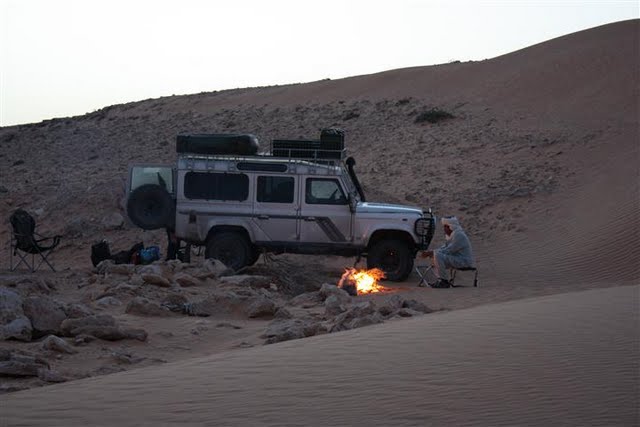 Stopped at 1748 at grid ref: N31 30.375  E 10 44.685, listening to Nessun Dorma watching the sun set.  Mahmoud lit a fire and Sarah accidentally nearly killed him when she fed him ham as part of the tin of tarte a flette!  Oops, really not intentional.

From the desert we headed to Nalut, for a look around the old town. Health and safety nightmare, and wouldn’t recommend wearing flip flops to clamber up and down the ram-shackled remains of the houses.  The castle was in fact a huge grain store, where each family member has their own room for storing grain and huge vats of olive oil.
An afternoon of driving followed as we headed for Leptis Magna.  We stopped at the campsite across the road from the entrance and ate in the restaurant opposite. Again it was 3 courses for 15 LP/£7.50.  A Libyan soup to start with, which was excellent, followed by chicken for Sarah ( not so good), Lamb and cous cous for Rob which was tasty. Bananas and dates to follow.
The campsite offered internet but the link was very unreliable and slow.
Campsite: N 32 37.911 E 14 17.381.  10LYD,   Our guide took it upon himself to book a hotel room as he’d wanted to camp on the beach. Also he wanted us to pay, but we refused to do this as neither he or Farhat had agreed to hotels before we left.  Caused a few huffs and puffs and toys certainly left the pram.

Tuesday 19th October/day 15 – Leptis Magna – heading for border: Odometer – 75570 km.
Leptis Magna is well worth the effort to visit Libya.   The site is set on the coast with views out over the sea. 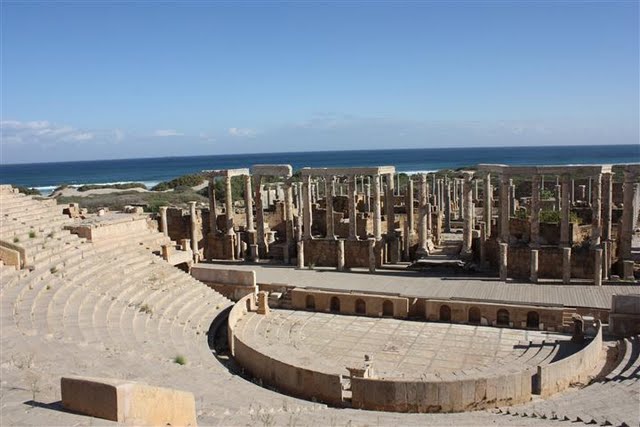 The baths, market area, churches are still fantastically intact and two very good yet hot hours were spent roaming the site.
Next stop Tripoli where we experienced some of the worst driving yet.  The Libyan’s have no rules for the road and who ever is driving has to be ready for everyone driving at 80mph, in no specific lane, leaving and entering the road from either the left of right. I think Rob did really well considering the madness on the road.  We changed some more money at the Four Season hotel and made good use of their clean loos!
Tooth ache easing.
Bushed camped at N30 25.039 E18 36.187

Libya notes:
1. Money exchange – you can do this with the touts as you leave Ben Guedarmes or as you enter Libya. There is a bank on the right as soon as you are over the border. Make sure your guide gives you the relevant form to take into the bank with you.
2. Entry into the tourist sites all seem to be 6LYD pp.
3. Tripoli – and everywhere else really, driving is dreadful. Cars flashing at you, driving at 80 mph with children in the front seats without belts weaving in and out.
4.  Traffic lights – akin to the wacky races.  On your marks…go!  In general it is normal to drive in either direction on any road, including motorways.  It takes some getting used to.
5. Women are hardly visible.  Apparently they are in hospitals or schools with children, and if they do venture onto the roads they have to drive very small white cars.  Make of that what you want.
6.  Apart from two groups of Italian tourists at Sebratha and Leptis Magna, we didn’t see any other European people throughout our stay.
7. Agree where the guide will stay before you leave your fixer.  If he wants to stay in hotels and you are camping, make sure you agree who will pay for the hotels.
8.  Road from Ajdabiya to Tubruk is very long, almost 400kms and is nothing but flat, monotonous desert.
9. Lots of processed cheese triangles, edam cheese and bananas are available in the shops.
10. Toilets on the whole, disgusting.
11. Huge gap in the market for dentists and dustbin men!  The whole country is treated like a rubbish dump. – The only bins we saw were in Ghadamis.
12.  The desert to the south is stunning and worth putting up with the rubbish and abysmal driving to see.
13.  The best meal we ate ate (not just in Libya, but so far) was cooked by our guide’s family.  One of the highlights of the journey.
14.  The locals were delighted to meet tourists, the truckers in the desert in particular.  Fantastic!