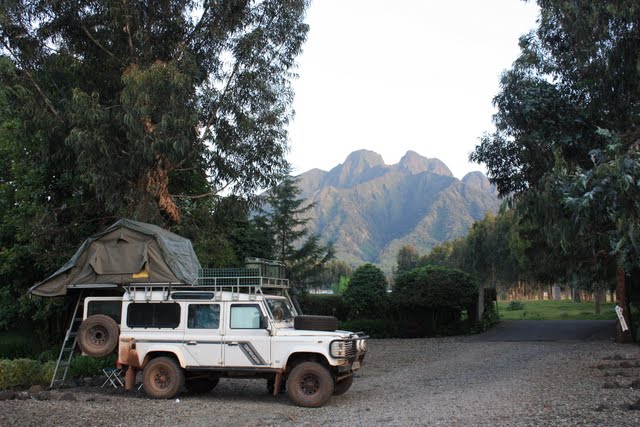 We arrived at the National Park offices by 06.48am, permits handed in and ready to trek.  Sadly we then had to wait about 30 mins for the many tour groups to roll in before anything happened. Then before we knew it, everyone seemed to be directed to a guide except for a handful of odds & sods for which we fell into.  A group of 7 was formed.

The guides initially asked us how far we would like to walk. The responses ranged from 1 to 2 hours, for which the guide must have liked as he told us this was about right for the group we were going to see.

The group was infact a research group and therefore we were lucky to see them.

After about 30 min drive we parked up and started the trek.  Straight up-hill we went and continued for the next 2 hours. Sarah’s lungs were busting so a fair few stops were needed, along with a little help from one of the porters who dragged Sarah up a few of the steeper inclines.

As we got closer, we were told to leave our rucksacks, walking poles etc. and only take cameras as we were now very close to the Gorillas. 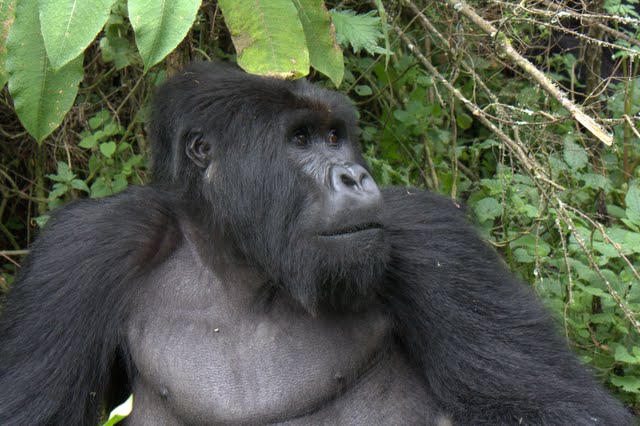 As we crept around a tree we saw our first Gorilla which was a black-back/young male.  Everyone within the group was encouraged to go forward which of course we all did, but before we knew it the black-back was thumping his chest and was off heading directly for us all.

“Fear” – we don’t have the dictionary definition to hand, but we would like to define it as the feeling you have when a black-back gorilla is thundering towards you for the second time, after already knocking you for six, with clear intent on repeating the exercise.

In an instant Sarah had been pushed over and Rob was also somewhere in the jungle undergrowth having been shoved by the Gorilla.  Good god that was scary!

After picking ourselves up off the floor we headed off once again following the guides and again we were in sight of the black-back.  Rob and the main group was now ahead of Sarah with the black-back between us.  Yet again the black-back was thumping that great chest of his again and he was off, but this time it was just terrifying.

Sarah turned away quickly but was hit first on her shoulder and landed in the undergrowth, only to quickly look up and see the gorilla heading directly for the other group which Rob was part of.  Bodies were soon everywhere as the black-back made his way through.

In hindsight, the Gorilla didn’t hit us as such, just pushed us to one side but with an almighty shove. Sarah has a Gorilla hand print on her shoulder.  Rob escaped with bruises to his forarm. 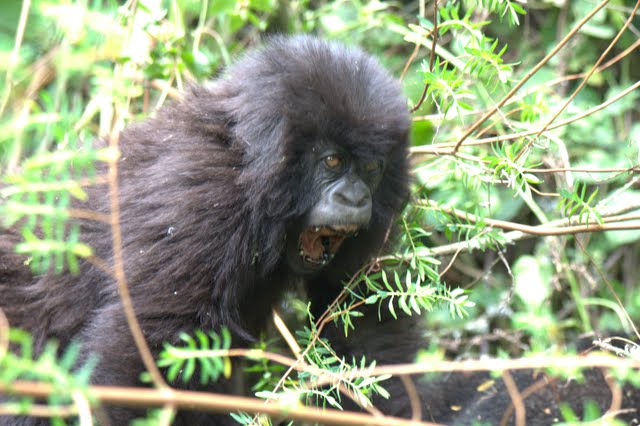 Once we had all got over the shock of what had just happened we edged forward once again to see the silver back laying on his stomach with the rest of the gorillas around him.  The lively black-back who was showing off and hit us had now calmed down and was asleep under a tree (thankfully), but there were still a few juveniles in the trees and  we were all a bit nervous that they would also decide to suddenly descend and use us a target practice as well!

With adrenalin pumping, we then had the rest of the hour watching the silver back sleep with his family around him.  One of the younger fluffy members of the group put on an excellent display for us and descended from a tree onto the back of the Silverback and played for about 30 mins, while others either slept or moved leisurely around us.

We were also able to move around them quite easily and were within two meters of them most of the time.  So much for the seven to fifteen metre guidelines we were given.

Soon the afternoon siesta was over and the Silverback was off.  At this point I think the whole group took one massive step backwards. Having been hit by a black-back there was no-way any of us wanted the same welcome handshake from a Silverback!   We managed to follow the Silverback for a short distance into the jungle and watch him eat whilst some of the teenagers played in front of him. 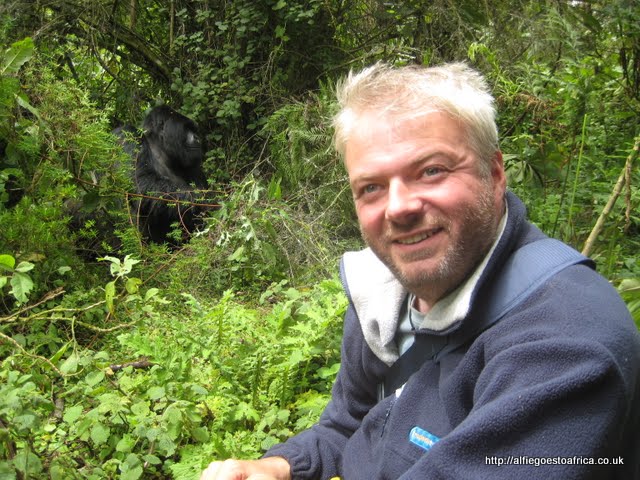 After an hour we were on our way back down the hillside.   A exhilarating experience, yet terrifying as well.   We are extremely glad we made the effort, paid the money and dragged Sarah up the hill-side.   We hope from the photos and video you can get an idea of how close we were.

We had seen the Ugenda group, a research group of 13 gorillas and climbed to 2800 metres.   We are still not sure who was researching who though.

Sarah had a lovely bruise developing on her left shin, however, can’t remember the pain yesterday.  Would have been the equivalent of a good thwack of a hockey stick.

After a quick check to ensure all body parts were still in tact, we headed off for our next adventure.

The Namibian couple we had met at Bunyonyi recommended the drive down the east of Lake Kivo towards Kamembe and they were right, it was a very scenic route through more volcanoes; high hill-side terraces packed with crops, banana and rows upon rows of tea plantations.  The Volcanoes National Park is a range of six extinct and three active volcanoes that straddle the Ugandan and Congolese borders and protects more than half the worlds population of the charismatic mountain gorilla. 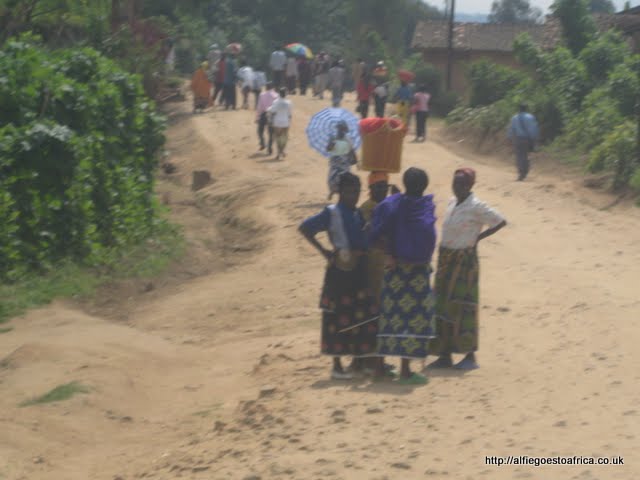 The villagers were again great to see.  The countryside was all very clean and the people busy either working on the crops, washing clothes, walking their cattle or simply walking along the road with umbrellas to protect them from the sun.  A mixture of age groups but we didn’t see that many old people but we did see lots of women with babies strapped to their backs.

We did start to see a number of Genocide memorials within in villages.  These varied from a small cross set within a small brick shrine, through to a larger plot covered with bright flowers.  All seemed to be painted blue and white.

However, we didn’t realise how bad the roads would be along this stretch which slowed us up significantly.  A rain storm arrived and darkness fell quickly reducing visibility to almost zero.

The challenge with Rwanda is that after the Genocide a number of towns have had their names changed to help with the rejuvenation programme, however, the maps and sat-nav haven’t got all the information loaded as such.  With the help of a torrential down pour and the rapid onset of darkness, we missed a turning for the town we wanted to stay at. The sight of an army patrol should have given it away but  before we knew it we found ourselves driving directly towards the red and white barrier gates of the border with the DRC.

An evasive left turn led to Rob driving Alfie slightly off the side of a wooden bridge with a bit of a loud crunch.

It was time to stop and find a hotel.  The Bradt guide recommended a couple within the border town and so we opted for the hotel run by Nuns.  Based on the assumption that they wouldn’t allow anything to harm us or Alfie.  (The Nuns weren’t that honest in the Sound of Music although we do understand why they took that part out of the German’s car…)

As there was no great reason to hang about at the border with the Congo, we headed off early towards Kigali via the Nyungwe Forest so that we could visit the main Genocide museum there. 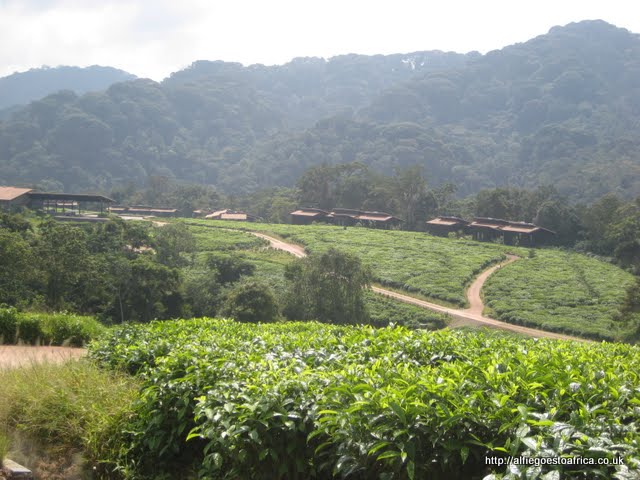 We had read about the new Nyungwe Forest Lodge which had been built earlier in the year and which was set within the Gisakura Tea Estate.  We decided that it was only right that we should go and have our breakfast there following our near visit to the Congo, a bad night and nearly breaking Alfie.

We think we were the only people there as we were greeted with such enthusiasm.   We were first shown to the lounge area and then onto the veranda area overlooking the tea plantations to have our breakfast.  Wow.   And there we were being fed on freshly made yoghurt, juices, bacon and eggs still dressed in our scruffy overland gear!  The chef even came out to check that our breakfasts were to our liking.  We just wished we had found this place last night as we are sure they would have let us camp in the grounds as long as we had eaten in the restaurant, which neither of us would have needed much persuading to do.

What a great start to the day and well worth the treat.

Nyungwe Forest lodge:  A lovely setting within the Gisakura Tea Estate on the forest boundary. Timber chalets overlook the forest, with the estate owned by Dubai World & managed by the  Mantis Collection.  Thoroughly recommended if you happen to be in the area.  Or even if you aren’t.      http://www.nyungweforestlodge.com

We were soon out of the tea plantations and winding our way up through a dense tangle of trees, again along a road clinging to steep forested slopes.   The views were amazing.  There was very little traffic so we had time to stop and gaze into the distant forest canopies ahead (and to the side) of us.

The Nyungwe Forest stretches over the mountainous south-west area of Rwanda. Nyungwe protects the largest remaining tract of medium-altitude forest anywhere in Africa. The forest provides water to some 70% of the country and its central ridges form the watershed between Africa’s two largest draining systems, the Nile and the Congo – see photo.  It is here that it was recently established as the most remote source of the Nile.

The road improved greatly and we were soon within reach of Kigali, Rwanda’s capital, only to be welcomed by another rain storm. The Genocide museum is easy to find and costs $15 pp but this also includes a audio-guide.

The museum was incredibly interesting and was very informative.  Surrounding the main building there are rose gardens planted in memory of the adults and a fruit garden to remember the children.   There is a wall of names which is just starting to be completed.  Although, sadly, there are just rows of the same surnames – very thought provoking.

We would recommend to anyone who is visiting Rwanda that they visit the memorial as you realise how far this country has now moved on.  By comparison to other African countries we have travelled through, it is clean, people are working, fields have strong and healthy crops in them and from talking to some volunteers working here, both Tutsis, Hutus and Twa want to make everything work.   They even have a rule that on the last Saturday of the month, everyone must help clean the streets, towns etc.   Great stuff.

The evening was spent at Jambo Pleasure Beach  – Thanks Bradt, couldn’t be further from the truth. Wouldn’t recommended it to anyone.  The food was very poor and the music was just too too loud… It’s not just us getting old, it was loud, rubbish and distorted.  I think the feed came from a satellite channel that wouldn’t quite lock on.  Dreadful !